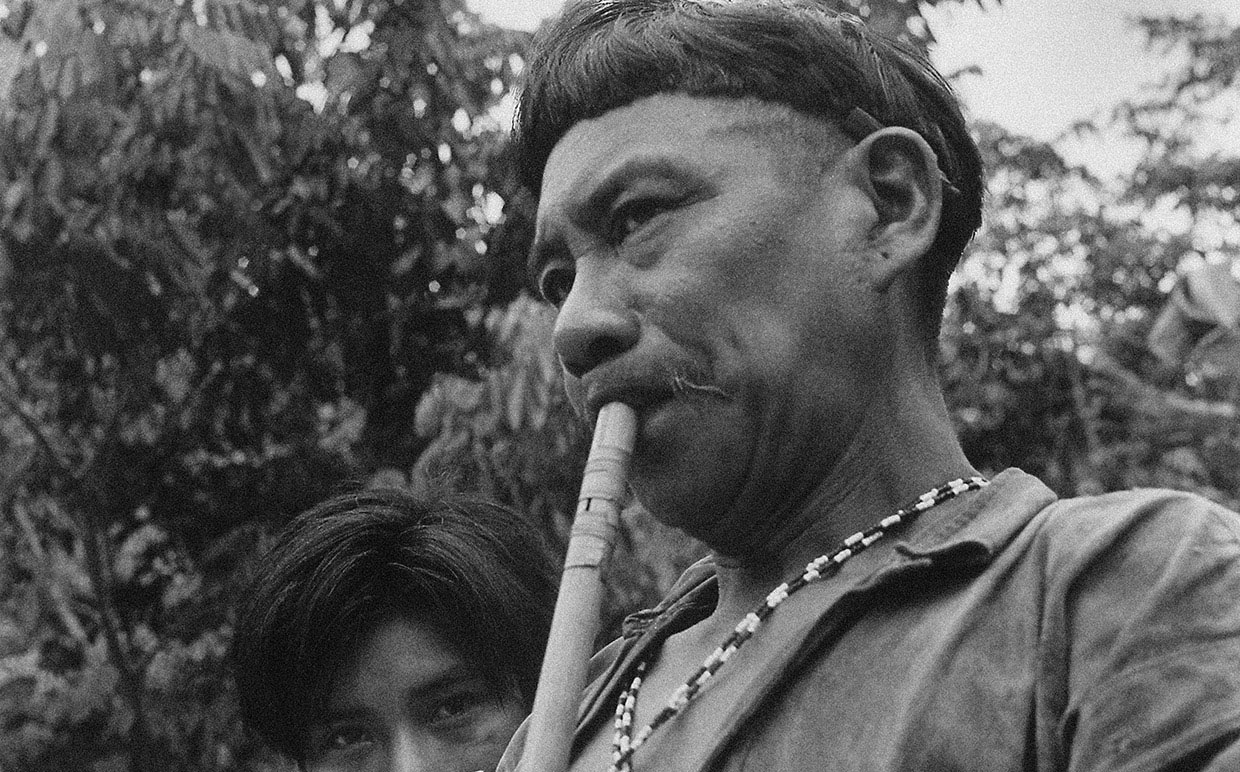 DE'ÃRUWA
Lords of the Jungle
After death, the soul of the DeâÃ¡ruwa shaman travels to the place of the winds on top of the mountain. There he inhales yopo and sings. The shamanâs throat becomes a flute that preserves his songs. A jaguar is born from his breath, and bees, from his eyes. The souls of the common people return to their original sphere. There they copulate with siblings of the opposite sex in a barren, incestuous encounter.
DE'ÃRUWA
Lords of the Jungle

Because the territories occupied by the DeâÃ¡ruwa were isolated and nearly impossible to penetrate, contact with the outside world was sporadic until the mid-twentieth century. 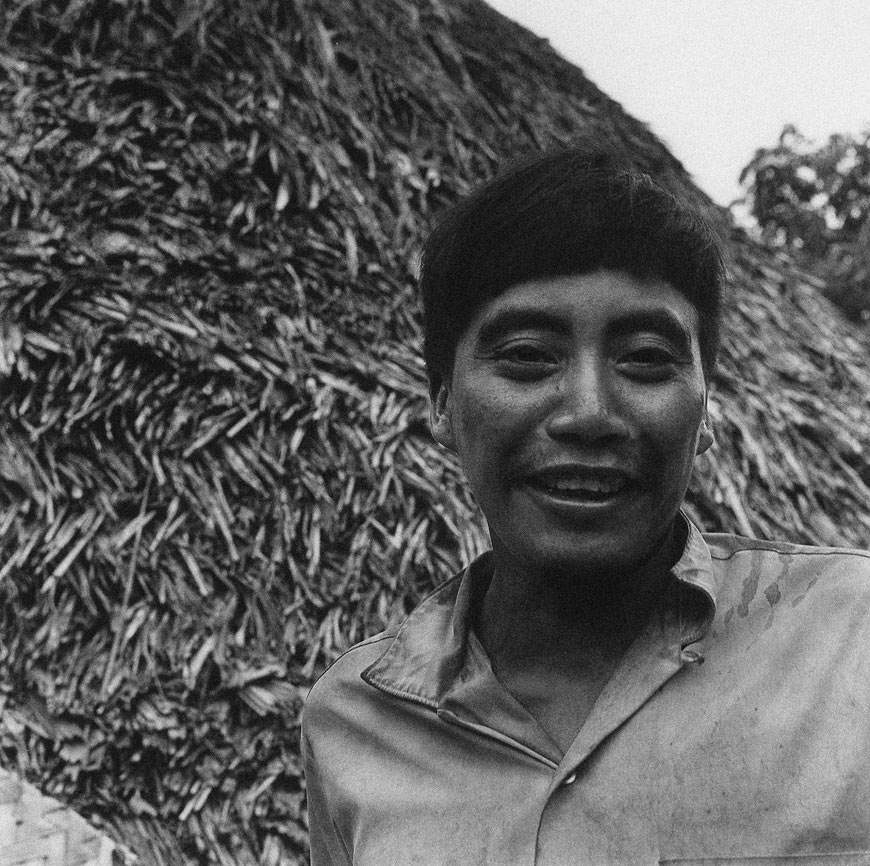 The DeâÃ¡ruwa speak a language in the SÃ¡liva family, although some words are borrowed from Arawak and Caribe languages. They call all creatures that are born, live, and die in the jungle "De'Ã¡ruwa", and refer to themselves as the âlords of the jungle.â In ethnological literature, they are also called Piaroa.

The DeâÃ¡ruwa have traditionally inhabited areas of tropical rain forest on the right bank of the Orinoco in which occasional bare sandstone formations rise through the canopy. Contact with missionaries and government officials in the 1950s caused epidemics. In the aftermath, many DeâÃ¡ruwa moved closer to criollo villages in order to be near medical treatment. 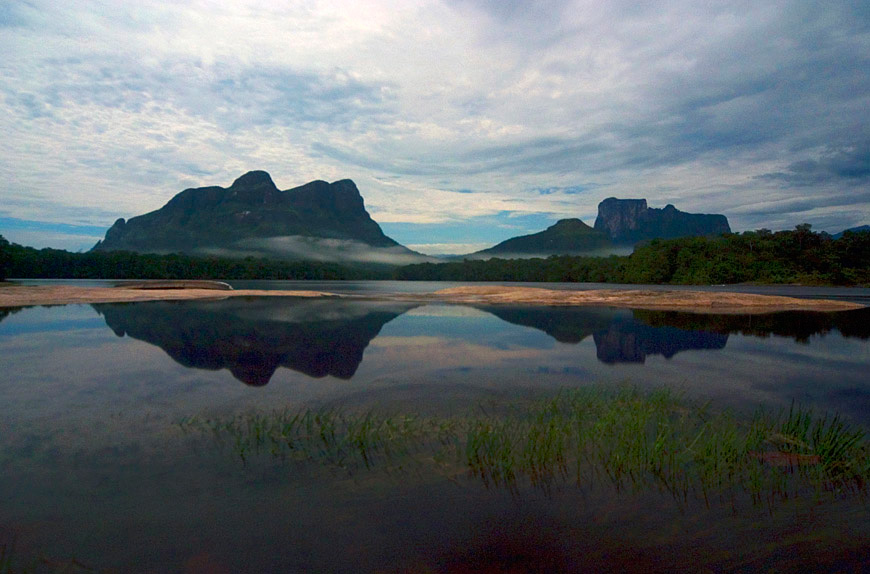 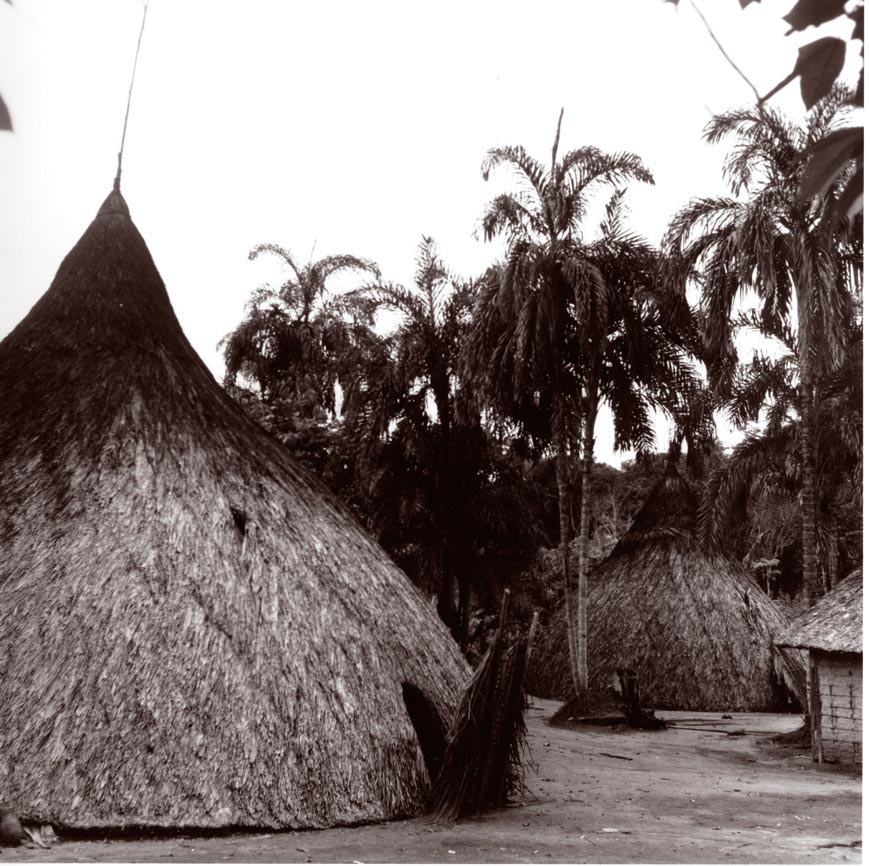 DeâÃ¡ruwa settlements consist of a group of communal family homes called churuatas. Although rudimentary in appearance, the churuata is a synthesis of symmetry and utility. 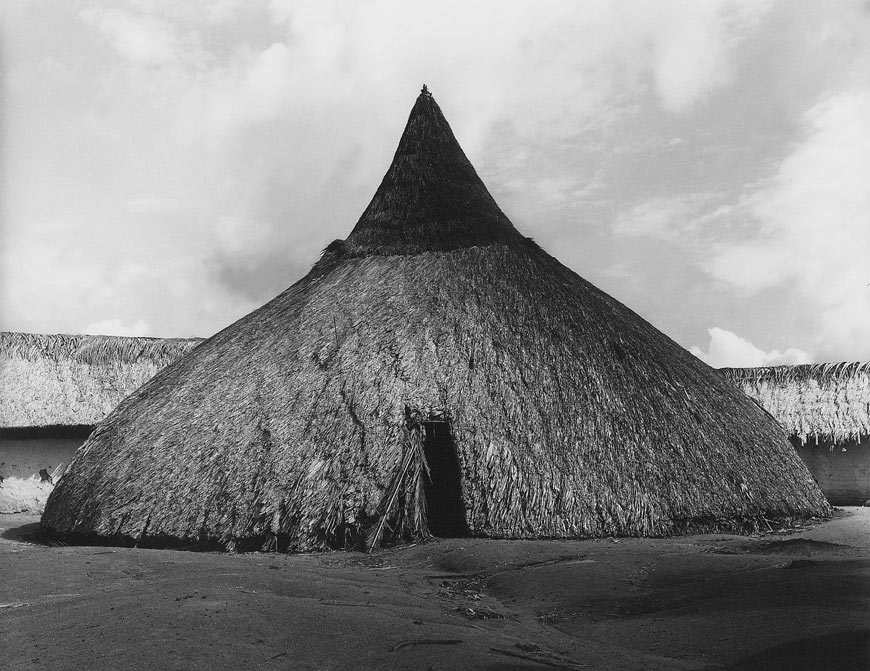 The De'Ã¡ruwa build their traditional communal churuata with a short dome shape, with a conical roof made of palm leaves. It may measure as much as 18.5 yards across and 13 yards high, and house between 5 to 100 people. Inside the churuata, dimly lit by torches, is a network of beams and girders mounted in concentric rings. 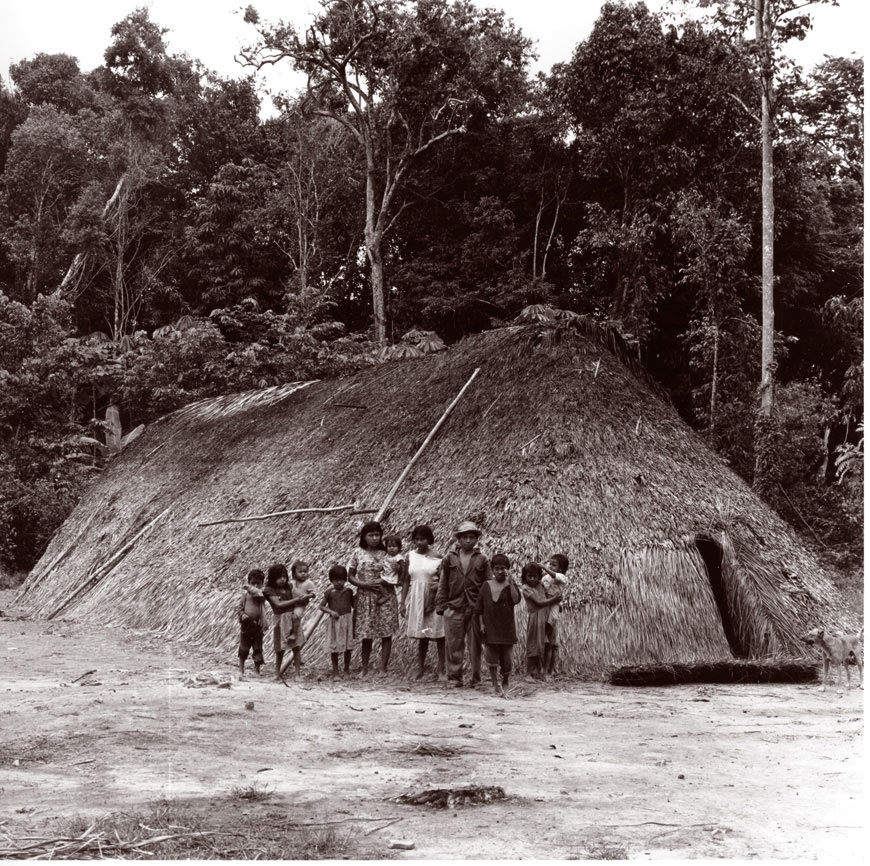 Although there are no physical structures to divide families within a churuata, each family has its own area for storing belongings, sleeping in hammocks, and cooking. All of the churuata's inhabitants are free to use the central area, where they can gather to perform rituals, make crafts, and entertain guests.

The DeâÃ¡ruwa adorn their bodies with dyes and decorations infused with symbolism. They create musical instruments on which they play magic ritual songs that relate myths of the animal world. The complex Warime ritual is a reenactment of the creation of the world involving music, dance, masks, and the passage of ritual knowledge.

Traditionally, DeâÃ¡ruwa men and women wear loincloths woven of cotton harvested from their own conucos. They adorn their bodies with feathers as well as crowns, bracelets, and necklaces. They create necklaces with alligator or bÃ¡quiro teeth threaded together with multicolored feathers. 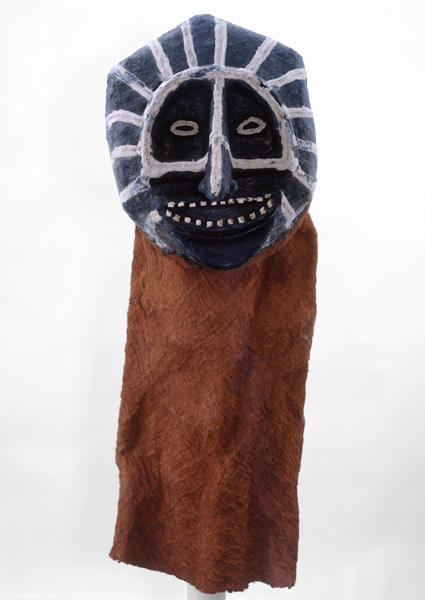 The more experienced of the DeâÃ¡ruwa men construct the masks used in the Warime ritual. No one person creates a particular mask; rather, it is a communal effort. The symbolic significance of each mask comes about in the process of construction. 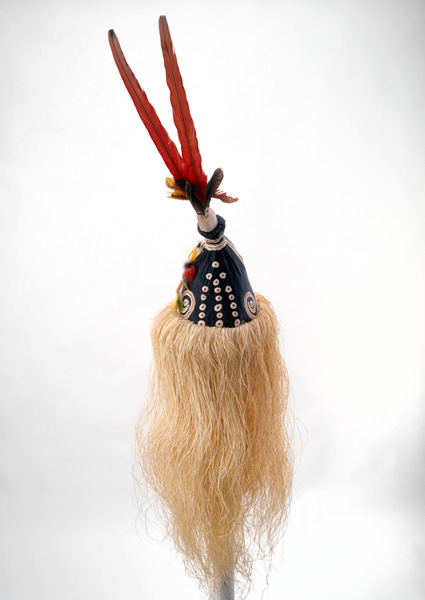 The men use various materialsÂ  to give the masks shape, and, in the final step of the process, the masks are painted and attains a status identical the animal spirit it represents.
DeâÃ¡ruwa musical instruments imitate the sounds of ancestral animals. The wora, for example, is a bamboo flute that when played mimics the sound of a jaguar's growl. Other flutes imitate the sound of the toucan or the screech of the howler monkey. Although considered sacred objects, today many of these instruments are also made for commercial sale. 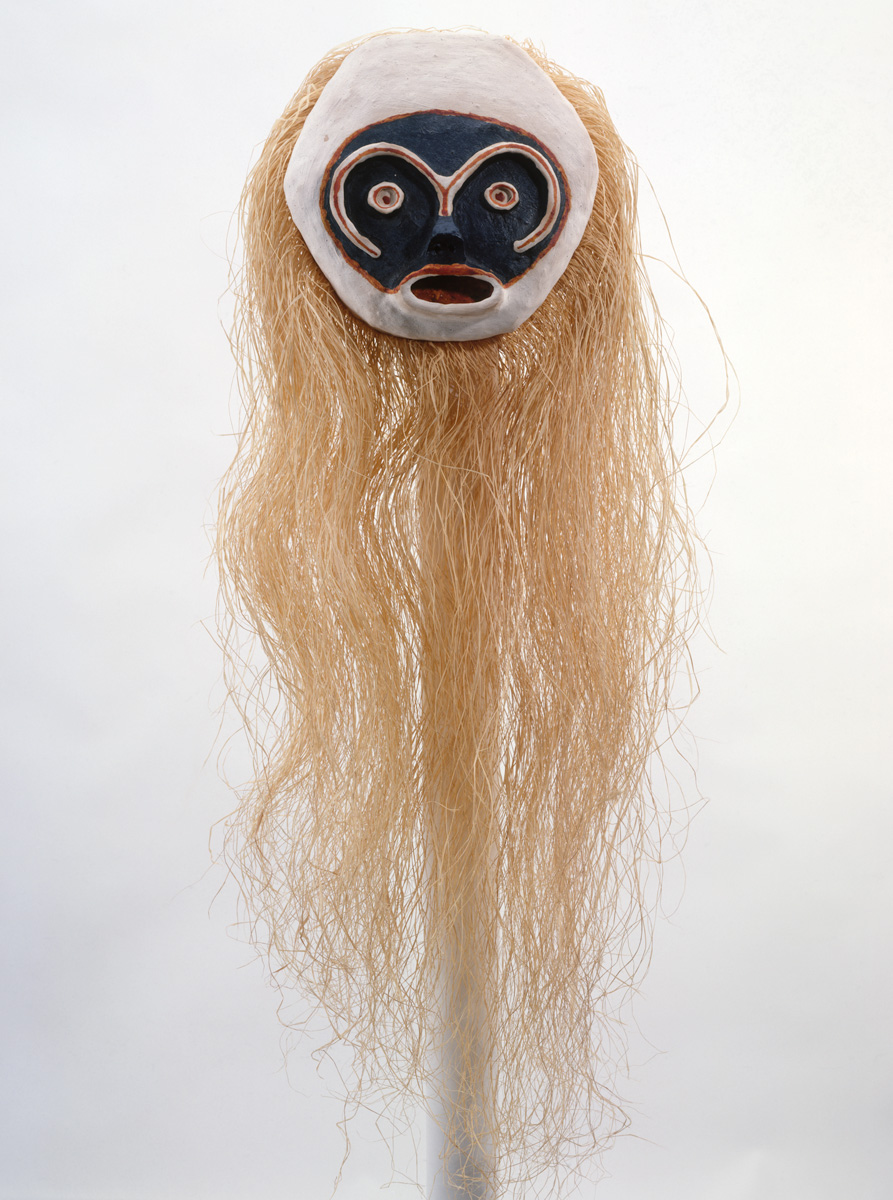 The monkey mask for the Warime dance symbolizes the De'Ã¡ruwa creational myth.
Hishu Mask
The most important DeâÃ¡ruwa ritual is the warime, a fertility ceremony practiced every three years. For this ceremony, the DeâÃ¡ruwa summon their mythical ancestors, the bÃ¡quiros (peccaries). For the warime ceremony, the De'Ã¡ruwa make sacred objects like masks, musical instruments, and special garments. The masks represent the bÃ¡quiro; the white monkey; and Reâyo, the evil spirit of the bee. 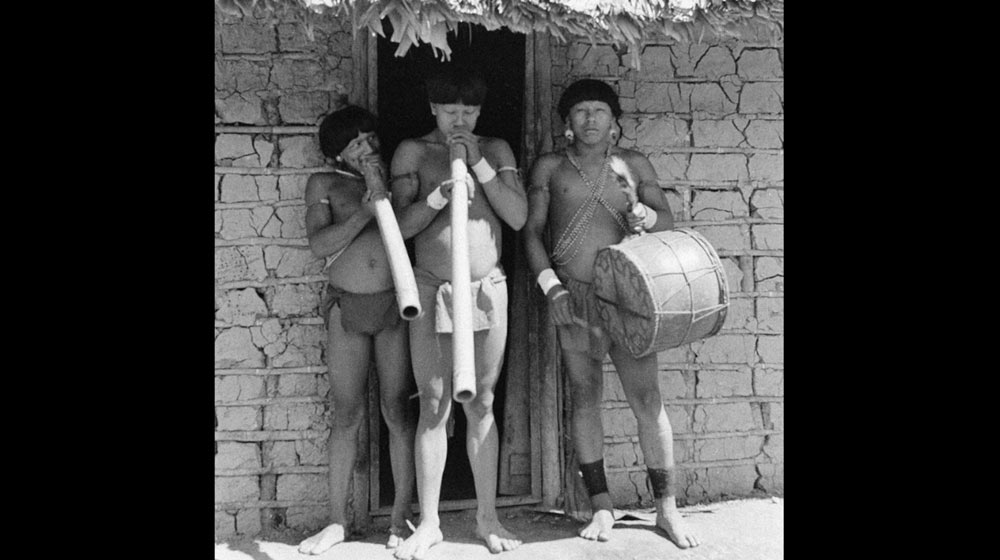 As is common in the Amazonas region, the DeâÃ¡ruwa clear plots near their dwellings for farming; hunt; fish; and gather food from the forest. They have a sophisticated botanical knowledge that allows them to select and prepare plants for food, rituals, medicine and poison for hunting. 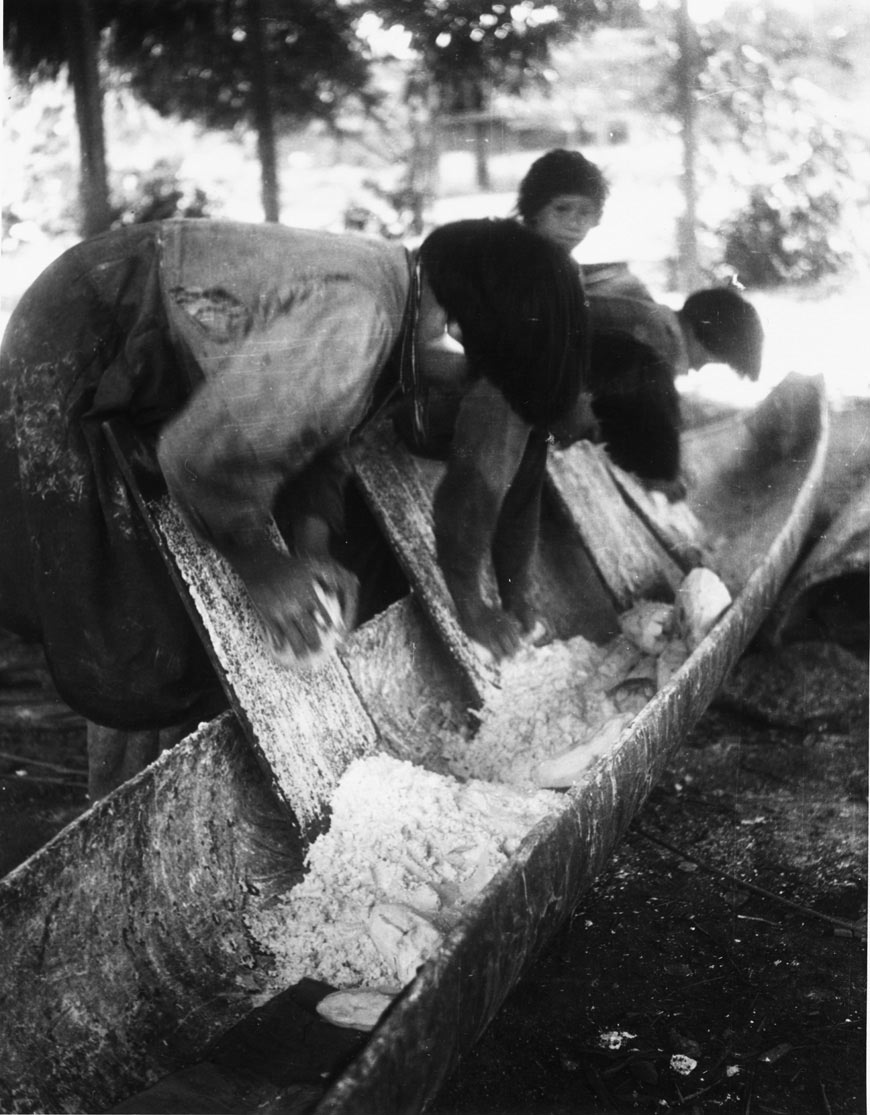 The De'Ã¡ruwa, like the Ye'kuana people pictured here, grate bitter yucca as part of the process that makes it edible.
Everyday life involves farming in conucos during the rainy season. These conucos, or farm plots, are tended near the churuatas. DeâÃ¡ruwa grow plantains, sweet potatoes, sugar cane, pineapples, cotton, and, especially, bitter yucca, their main staple. 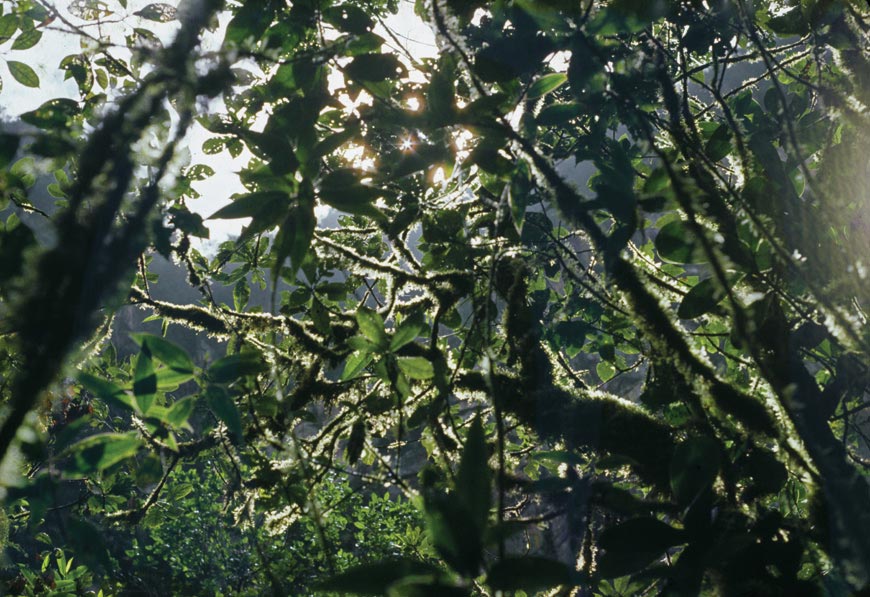 The DeâÃ¡ruwa also gather wild fruit, insects, and snakes from the forest for consumption. Small expeditions consisting of men, women, and children forage together. Upon their return, the goods they have gathered are shared with everyone in the communal home.

Men fabricate the objects needed for the Warime ritual in secret, in a structure off limits to the women, but other artisanal activities take place in the communal churuata's central area.

Some large DeâÃ¡ruwa settlements have a high level of cooperation that allows individuals to choose which activities to pursue. A DeâÃ¡ruwa man is not, for example, forced to go hunting if he would rather weave baskets. The craft of basketry for the DeâÃ¡ruwa is principally utilitarian. Among the baskets they weave are catumares, mapires, sebucanes, and guapas.
As is the case with other indigenous groups, pottery making has virtually disappeared since the introduction of aluminum and plastic containers. In the region of Alto Cuao, however, the DeâÃ¡ruwa do make pots and other clay containers that they use to store food and drink.