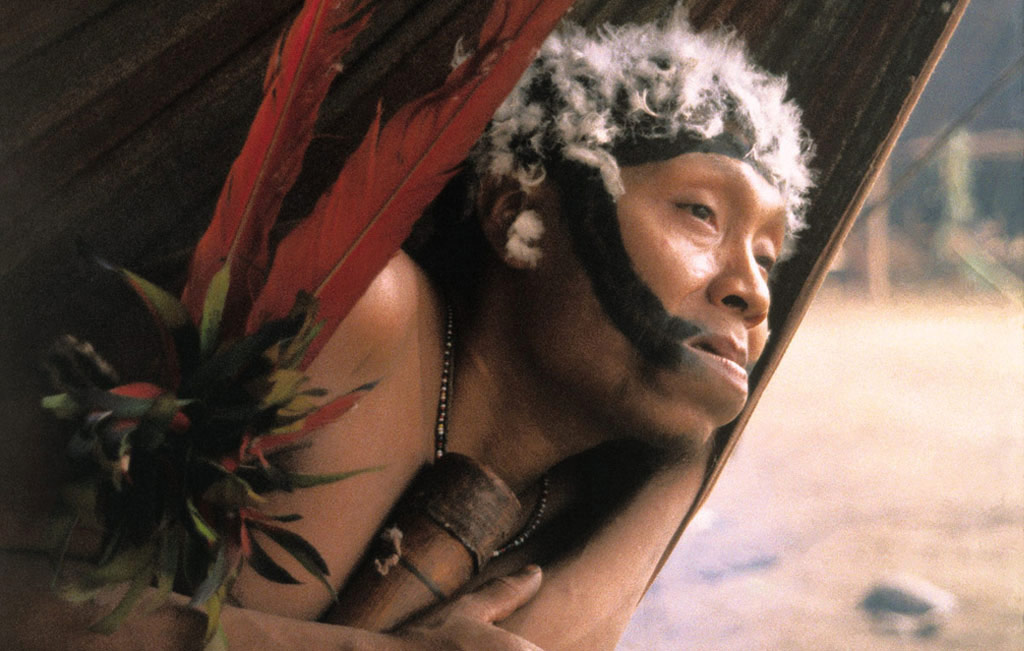 A Yanomami warrior from a &#34friendly village" rests in a hammock while visiting his neighbors.
YANOMAMI
Children of the Moon
The moon dwelled in the body of a grand shaman. When he died, she was free to wander in space, but instead she returned to the earth to eat his incinerated bones. When the shamanâs relatives discovered this outrage, they attacked the moon with arrows but they fell harmlessly to the earth. The moon tried to evade the arrows by hiding in the clouds, but at last one of them penetrated, and her blood spilled to the earth. From the drops of her blood the Yanomami were born.
YANOMAMI
Children of the Moon

Of all of the indigenous groups of the Amazon, the Yanomami are without a doubt one of the most studied and well known. The name Yanomami means man, people or species. Those who are not Yanomami are ânapÃ«,â which roughly translates to âpeople who are foreign, urban, or dangerous.â This is how the Yanomami refer to everyone who is not Yanomami. Their language is unrelated to any other of the South American language families. 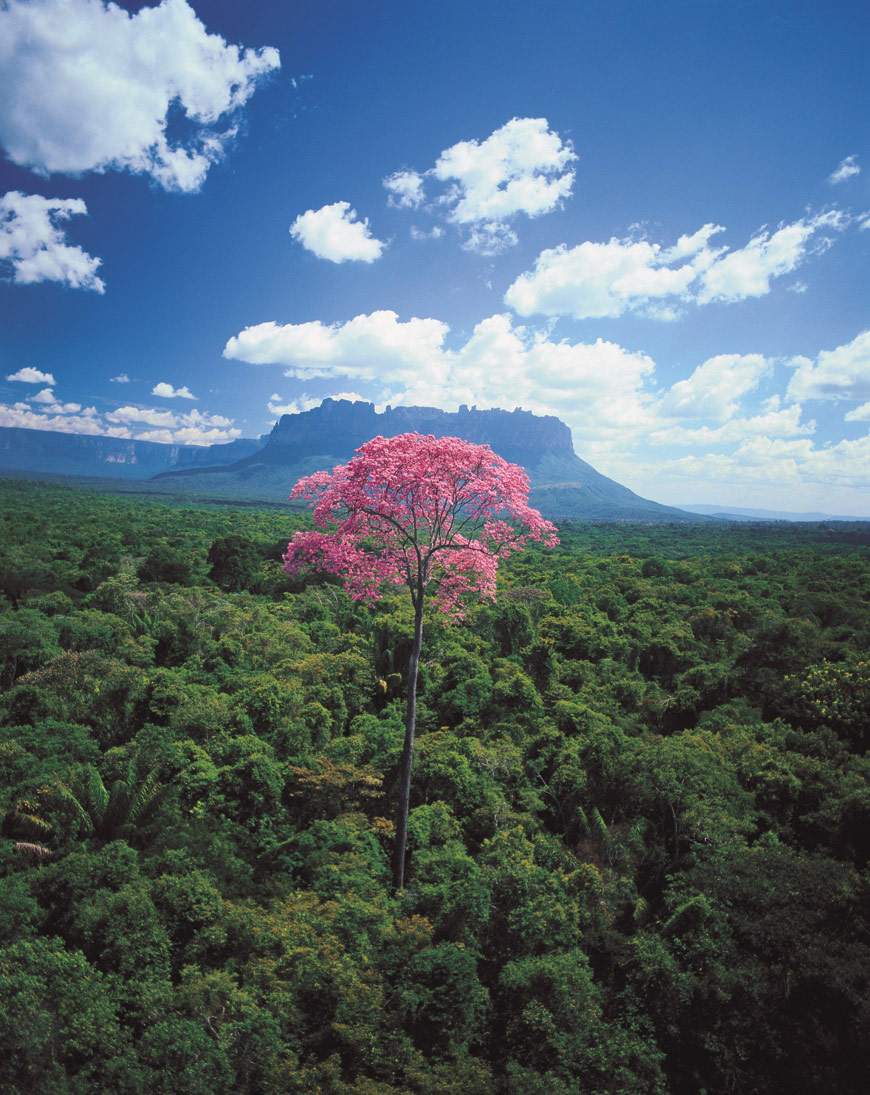 In the foreground, a puy (Eperua purpurea) flowers high above the general tree canopy in February. Beyond is the Auyantepui mountain, site of Angel Falls, the highest waterfall in the world.
The Yanomami are still one of the most populous groups in the northern Amazon lowlands. They inhabited the Parima mountain range and the upper Orinoco as early as 1758. 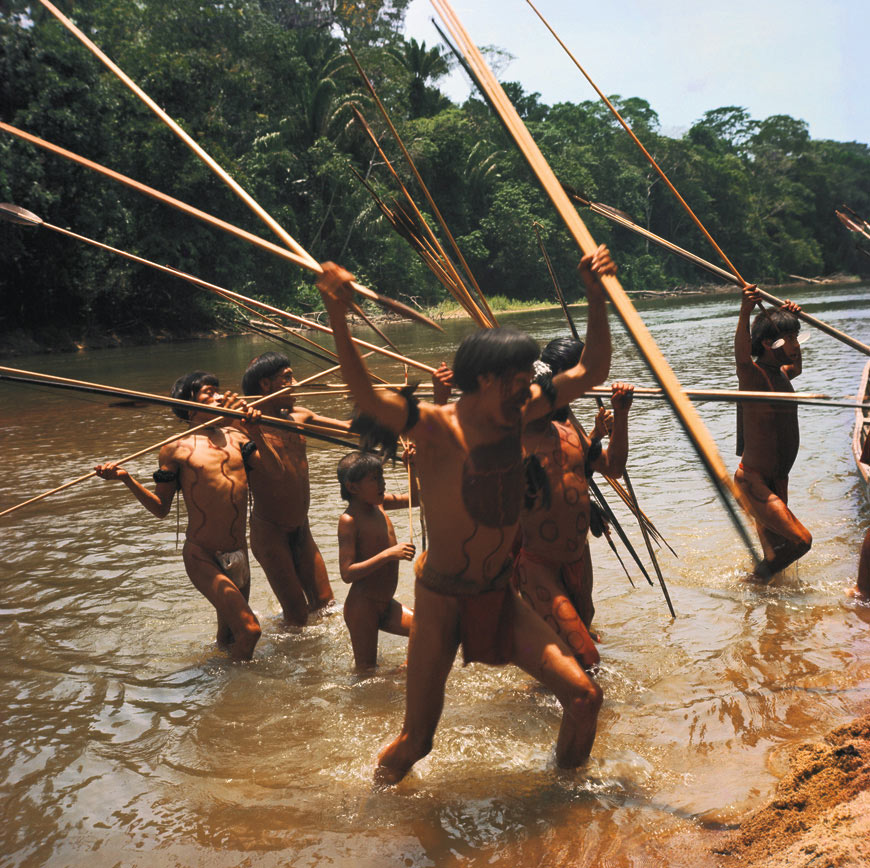 A group of armed Yanomami raiders from the Bisaasa-teri village in the Orinoco river.
At the moment of their earliest contacts with Europeans, the Yanomami had been in the middle of a significant demographic and geographic expansion, exploring new territories along the shores of the Orinoco, Padamo, and Mayaca rivers. In the northern and western zones of their territory, the Yanomami may have clashed with the Ye'kuana, who successfully resisted their advances.

Most of Yanomami territory, with the exception of some northern savannahs, is covered by tropical rainforest. 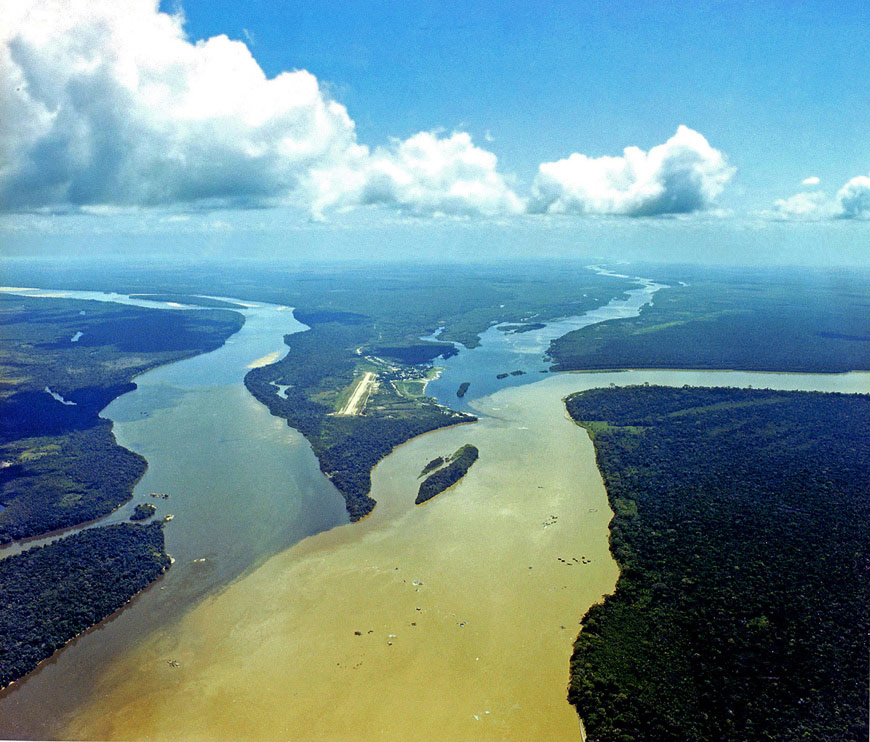 Today, the geographic center of the Yanomami in Venezuela is the territory between the Parima mountains and the Orinoco, particularly the basins of the Ocamo, Manaviche, and Mavaca rivers. Groups of Yanamomi also live in the outskirts of Brazil.
The word "yano" means house,Â  and reflects the central importance of shelter as a distinguishing feature of Yanomami culture. With materials from the forest, the Yanomami build communal houses called shabonos. They are circular, with an outer wall and overlapping lean-to roofsÂ  around a central clearing.

The Yanomami rely on produce from their gardens and food gathered from the forest.

People cook, eat, sleep, and perform rituals within the protection of their shabono homes. Yanomami sleep in hammocks, and children sleep with their mothers until they are four. Each family has a central hearth for cooking, around which they suspend the hammocks. Yanomami eat a wide variety of foods, from snakes, pigs, monkeys, deer, and jaguars to insects, fish, plantain, sweet potato, and palm fruits.
The Yanomami communities cultivate simple conuco gardens near their shabonos where they grow food crops, like plantains, sweet bananas,Â  and tropical tubers; and cotton, tobacco, and plants used for rituals and as dyes. Men clear and burn the land in preparation for the garden, and both men and women plant and harvest crops. 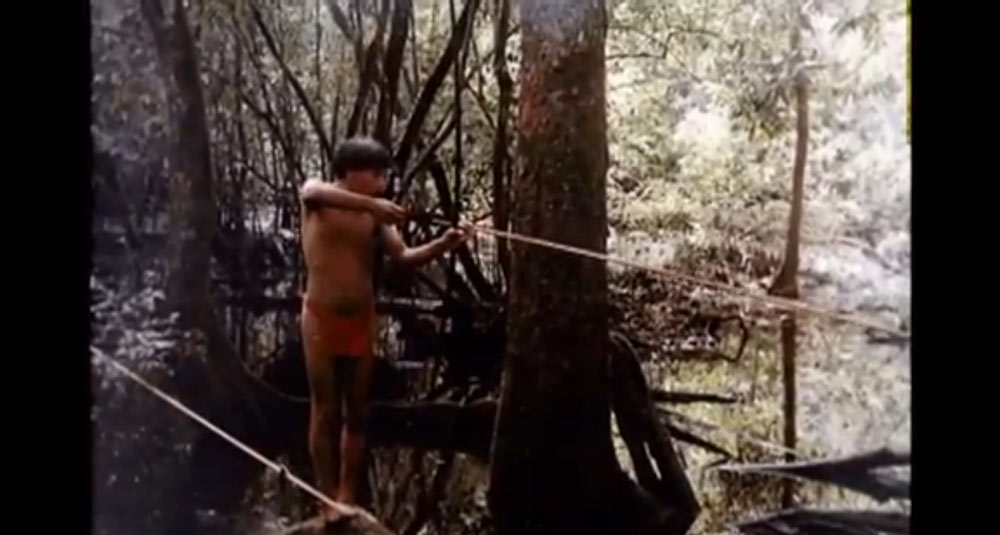 Although agriculture is important to the Yanomami,Â  hunting and fishing are alsoÂ  significant sources of food. The Yanomami distinguish between two types of hunting. One is known as ramÃ¯, which provides them with meat for everyday use, and the other is heniyomou, which is performed collectively by all the men of a community for celebrations and special guests. 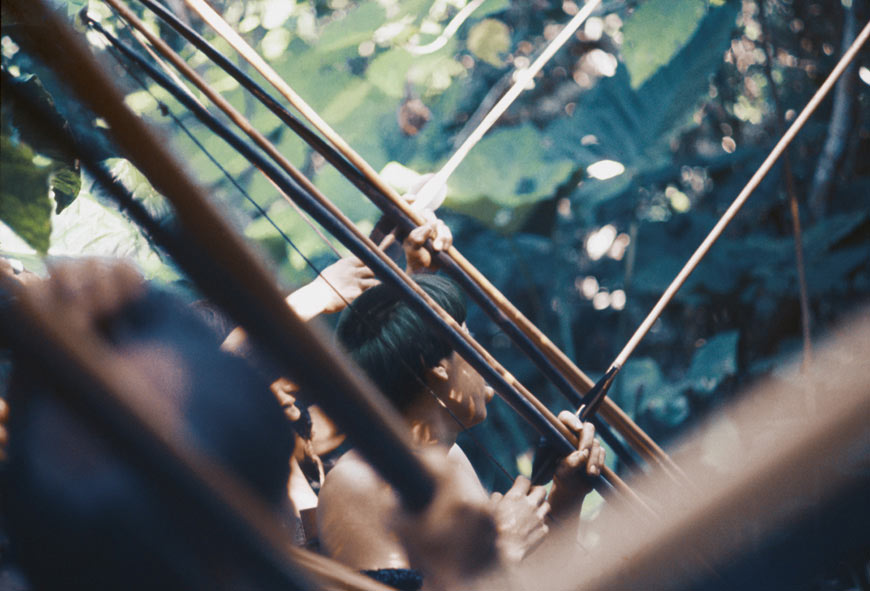 Heniyomou, a hunt that lasts for several days, is practiced for special feasts. Almost all of the men of the community participate in the heniyomou, while the women and girls remain in the village to perform the ritual hÃ«ri, in which they sing and dance to placate the game and entice it to surrender to the hunters. 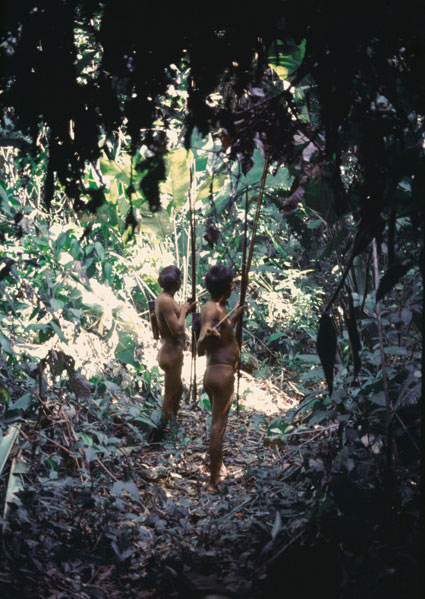 Almost every day, men will set out either alone or in small groups to hunt. They carry with them bows made of palmwood, and arrows with light, flexible shafts. 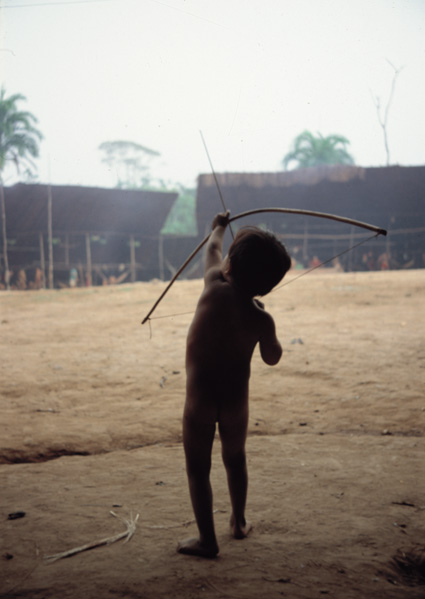 Women and children also do some of the Â hunting, going after smaller animals, fish, and crawfish.

The Yanomami structure their society with rituals and traditions that guide every aspect of their lives. 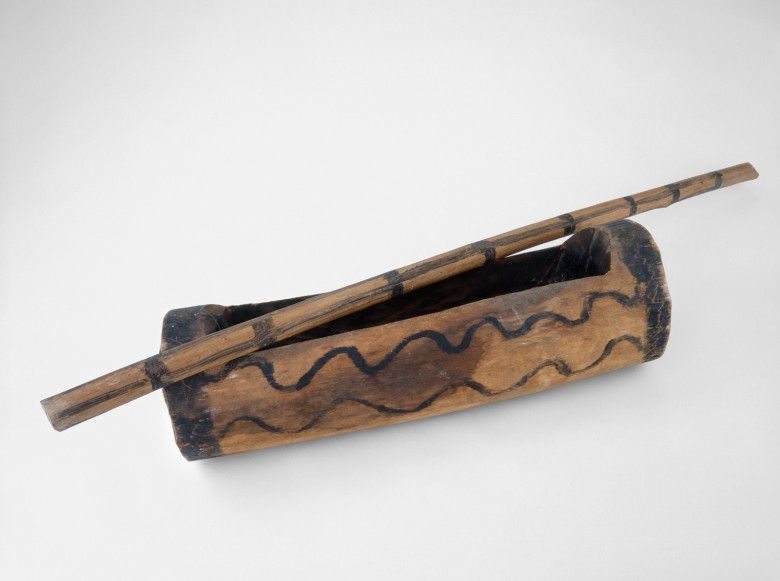 For the Yanomami, the collective ingestion of the deceased's ashes is an important ritual. The charred bones, eaten in a plantain soup, are ground in a funerary mortar carved from a tree trunk with fire and axe. Patterns painted on the mortar reflect the deceasedâs age, sex, and rank: black dots for adults and old men; red annatto for old women; and wavy lines for younger people of both sexes.
Ritual Mortar
One of the occasions that requires the type of hunting known as heniyomou is the funeral of a member of the group. When a Yanomami dies, the entire community weeps violently. Very soon after the death, a funeral pyre is erected in the shabono to burn the body. In the ritual known as reahu, the ashes of the dead are ground in a mortar and ingested by the community. Yanomami girl with tobacco.
Yanomami frequently consume yopo, a hallucinogen, during ritual ceremonies. From around the age of seven, Yanomami habitually tuck wads of tobacco between their lower teeth and lip. Stimulants allow the Yanomami to get in touch with the world of the supernatural, to cure illnesses, and pass on their collective memory. 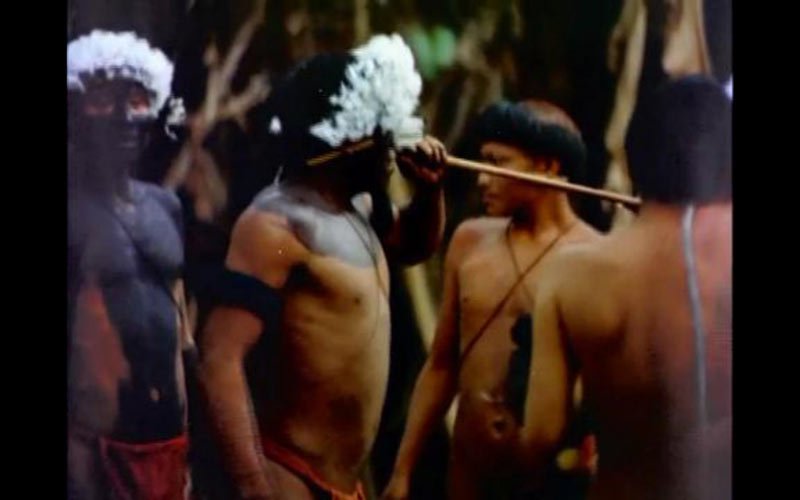 Each village has at least oneÂ  shaman, who is the spiritual leader and healer. At some stage in their lives, almost all men undergo the initiation rite to become a shaman. The initiation period takes months, or even years. Under the influence of the drug yopo, the novice submits to the instructions of the teacher. 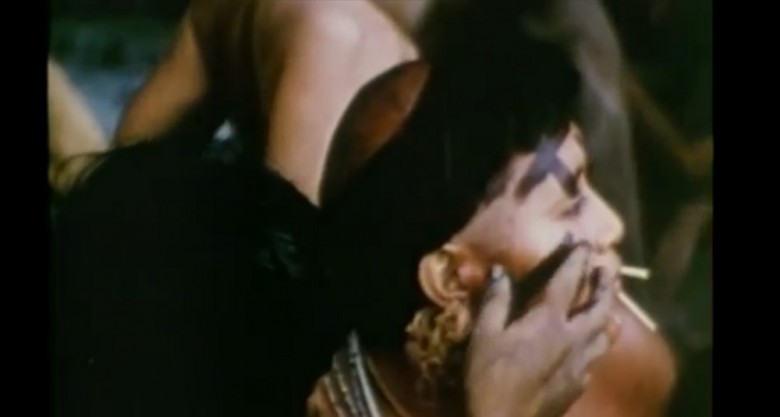 In mourning, a Yanomami woman wears black paint on her cheeks for a year before she can use red again. When men go to war, they wear black body paint to symbolize night and death. For some festivals, the Yanomami apply white clay over their bodies. Body painting with a variety of dyes is common; in addition to black and white, they generally use anoto for red, and for purple, they combine the onoto with a resin called caraÃ±a.
The Yanomami decorate their bodies with colors, patterns, and materials that vary according to the occasion, but traditionally wear no clothing. Men bind their foreskin with a cotton string tied around the waist in order to keep their penis upright and against the stomach. Women tie string around their upper arms and calves, and use cotton ornaments to decorate their hips and breasts.

Women make textiles, baskets, and, in the past, pottery; men make hunting and fishing implements. 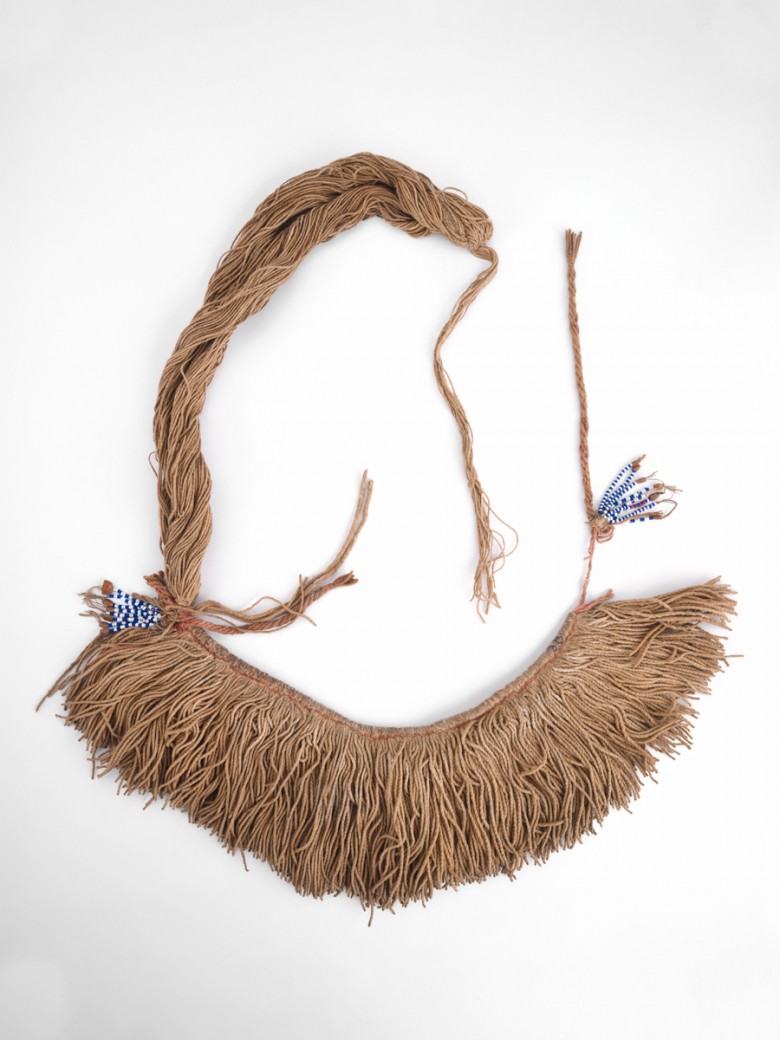 The Yanomami are usually nude. The few articles they occasionally wear are for adornment, rather than for modesty. This female guayuco, or loincloth, is used by young women in festivities.
Loin Cloth 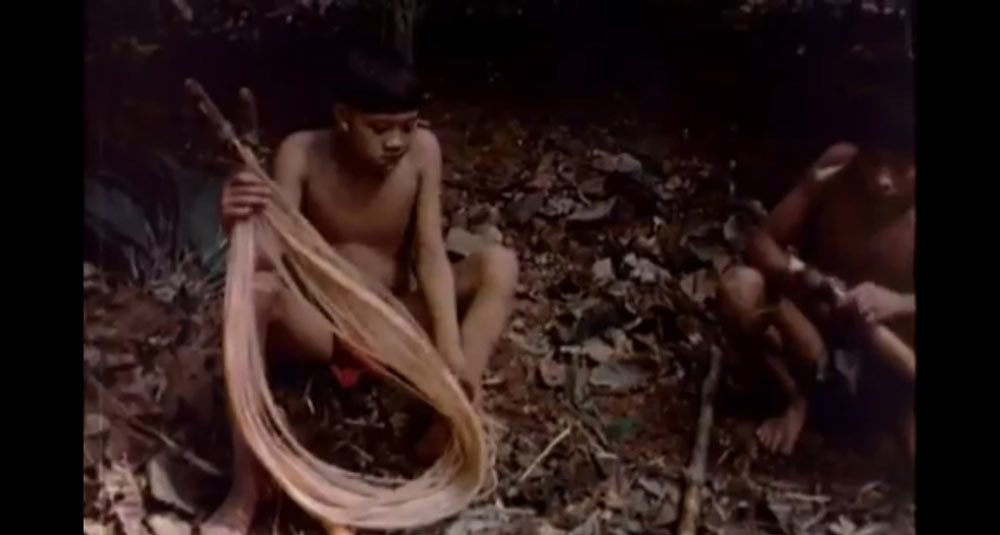 In addition to the guayuco, Yanomami textiles include the chinchorro or hammock that Yanomami women weave on rustic frames of wood nailed into the ground. During trips into the jungle, the Yanomami use mamure fiber to weave provisional hammocks, marakami-toku, which are often discarded after the trip. 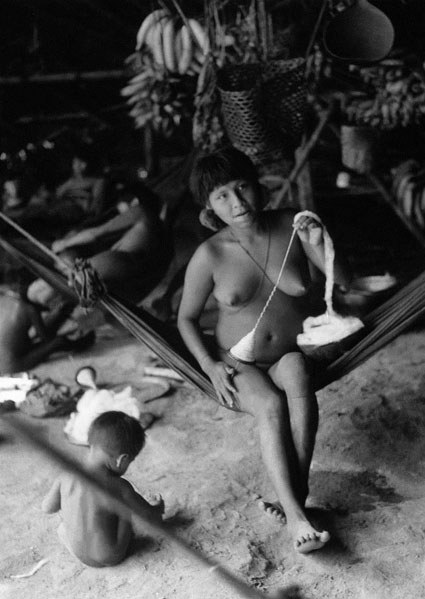 Yanomami women spin cotton (shinÃ¡ni), using spindles made of wood or a round seed. 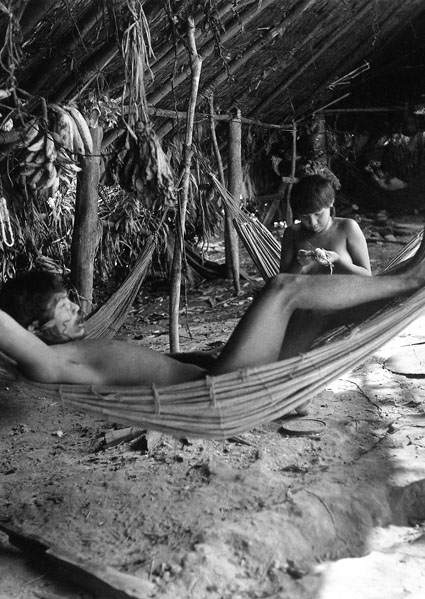 This cotton fiber is used to make hammocks and personal ornaments. 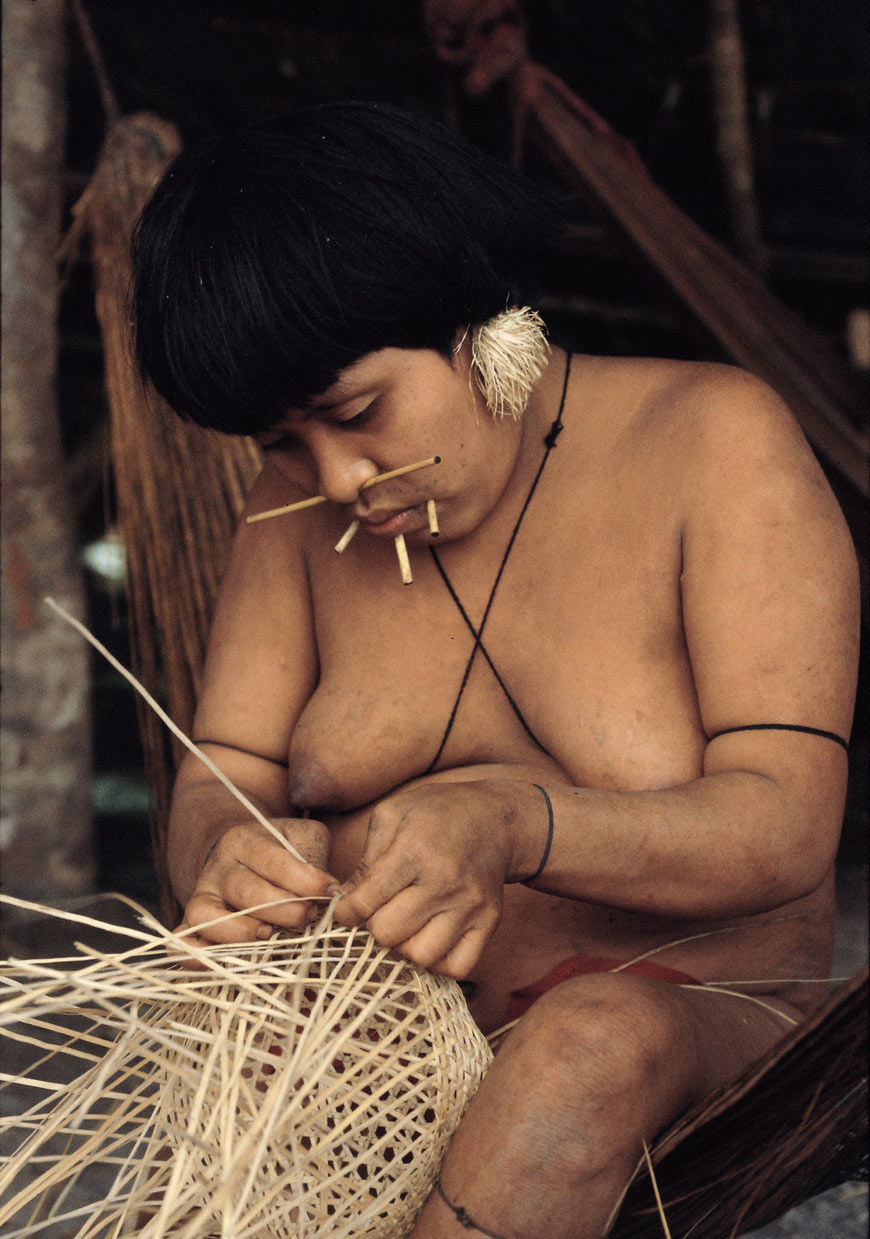 A Yanomami woman from the village of Konapuma-teri at the Siapa river weaves a basket.
Women use mamure fiber in basketry as well. They make guataras, guapas, and manares. They use different shapes and techniques according to the function of the basket. 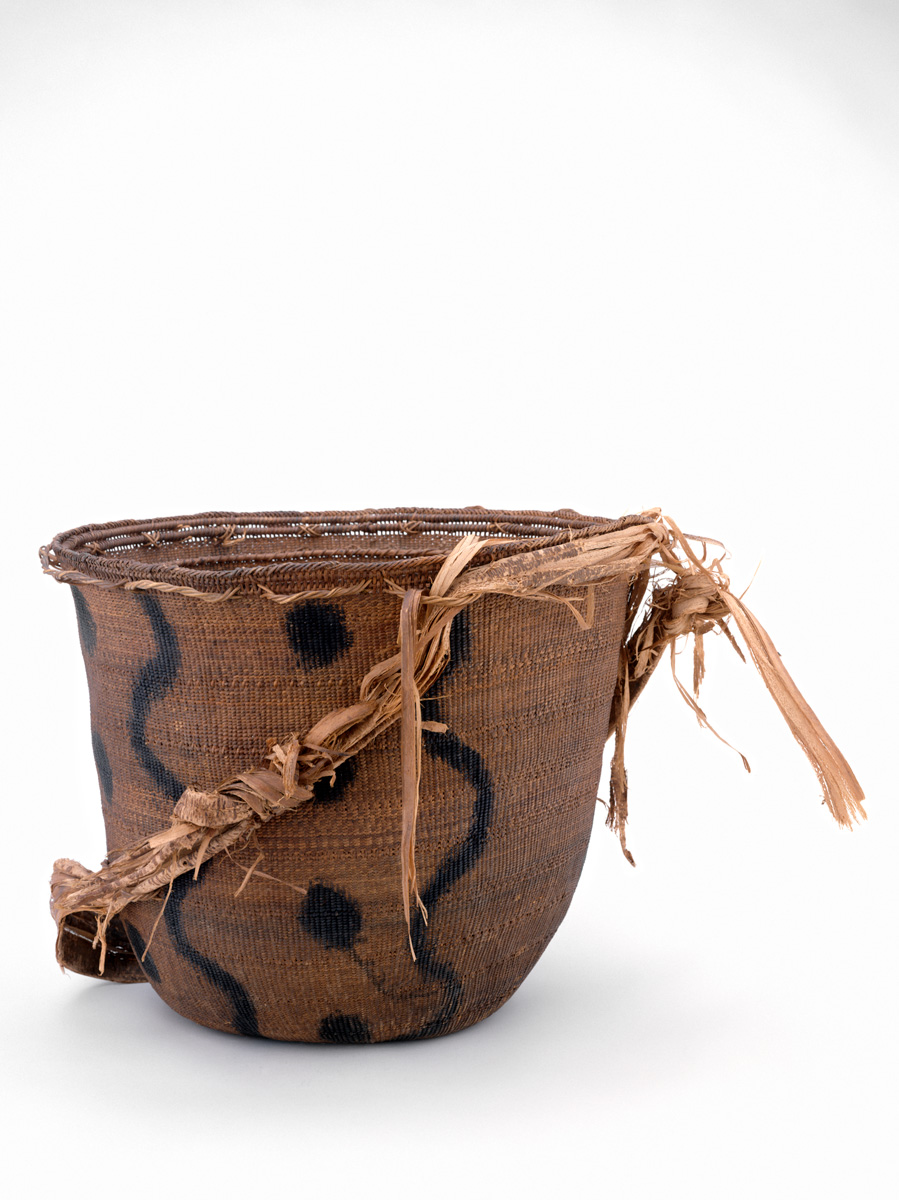 The guatura is a Yanomami basket used for carrying objects, made with dense braiding and ribbons of marima fibers for hauling. Decoration consists of simple and abstract patterns that sometimes represent sacred animals. Yanomami basketmaking is done by women, who use mamure to weave.
Guatura
The guatara, a basket most often used for carrying loads, is woven in a dense braid. 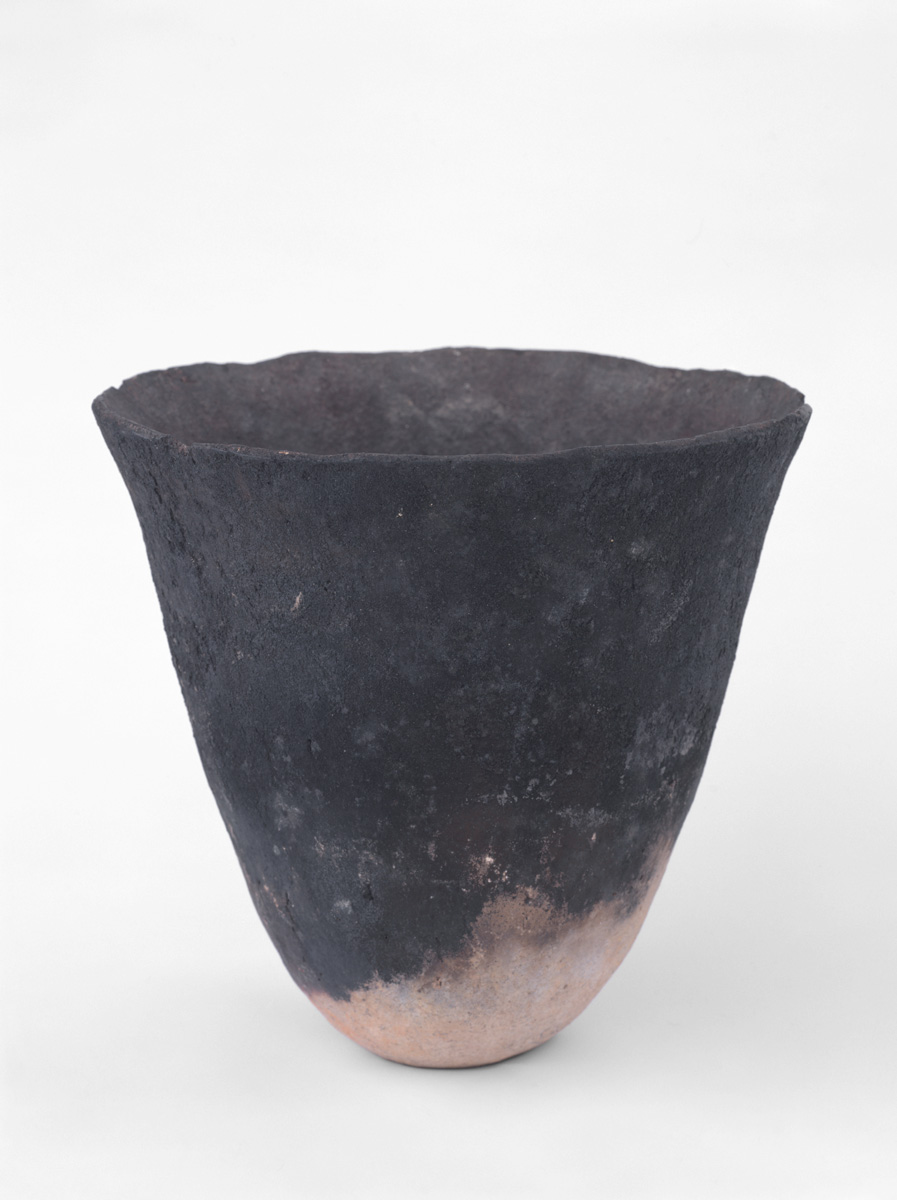 The "hapoka" was the traditional pot produced by the Yanomami. Hand modeled from white clay, it was dried in the shade and later fired. Its conical shape facilitated its use in stone ovens. When its short lifespan was over, hapokas were used to prepare yopo or other cooking ingredients. Today, they are increasingly rare, since they have been mostly replaced by aluminum pots.
Vessel
In the past, pottery was an important artisan craft in Yanomami culture, but today it has almost completely disappeared. Few communities still make the typical hapoka, a plain bell-shaped pot made with white clay. Since metal pots became available, the Yanomami have discontinued their tradition of pottery.
The Yanomami have kept the tradition of making bows and arrows alive, although firearms have been introduced, and acculturation has changed many other aspects of their lives, as well.